The Greater Swiss Mountain Dog (German: Grosser Schweizer Sennenhund or French: Grand Bouvier Suisse) is a dog breed which was developed in the Swiss Alps. The name Sennenhund refers to people called Senn or Senner, dairymen and herders in the Swiss Alps. Greater Swiss Mountain Dogs are almost certainly the result of indigenous dogs mating with large mastiff types brought to Switzerland by foreign settlers. At one time, the breed was believed to have been among the most popular in Switzerland.[1] It was assumed to have almost died out by the late 19th century, since its work was being done by other breeds or machines, but was rediscovered in the early 1900s.[2]

The breed is large and heavy-boned with great physical strength, but is still agile enough to perform the all-purpose farm duties it was originally used for.[2] Its breed standard calls for a black, white, and rust colored coat.

The Greater Swiss Mountain Dog is sociable, active, calm, and dignified, and loves being part of the family. It is relatively healthy for its size and tends to have far fewer problems than more popular breeds in its size range.[1] Among the four Sennenhunde, or Swiss mountain dogs, this breed is considered the oldest, and is also the largest. 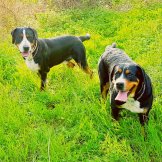 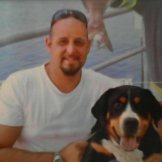 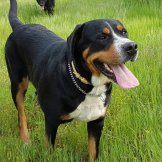 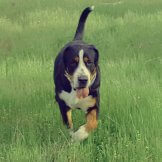